A Tonic for the Soul

Are you tired of hackneyed theatre endlessly repeating tired tropes and clichés? Do you suspect artists of being message-less and vain? Do you wonder where your next cultural gulp of fresh air will come from? Well hard luck, because if you missed Verbi: mill-bieb ’il ġewwa at Valletta Contemporary in early December, something that good probably won’t come around again any time soon.

It was a little bit demented and a little bit great, but definitely a little bit of what you fancy; Verbi was unlike anything we’ve seen in Malta in a long while. What were they doing those strange people cavorting and cross-dressing and cleaning, hanging themselves by their hair and feeding walnuts to their audience? Who cares, that’s what I say! Who cares what they were doing, if their doing it was hypnotic and cavorting, weird and wonderful? 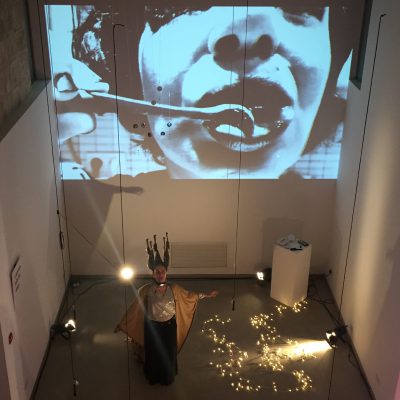 The performance was looped – repeated three times over the course of the evening – so the audience could join at any time. Depending on when you might have wandered in, you may have seen a beautiful boy putting on his make-up and getting ready to go out, or encountered a slightly unhinged woman speaking to an invisible manager on the phone. You might have sat for a portrait photo, or even been asked to help wash the floor. You might have followed two women circling a dining table; one elaborately removing her clothes, and the other picking them up and putting them on herself as they walked around and around in a distracted and farcical loop. Elsewhere, you might have read poetry on the walls, and allowed a dominatrix to guide you with strange light-appendages attached to the palms of her hands. Or you might simply have stopped to listen to the music being layered onto all this frenetic activity.

It’s not easy to describe what went on between the many walls of the gallery during the performance (was it a performance? an exhibition? does it matter?). To use the words with which it described itself would be to undersell it; the claim that it “blurs the dividing lines between photographic exhibition, installation, dance, theatre, video projection, drama, music concert, etc., creating a multidisciplinary and multisensorial experience” did not reflect the richness of its texts, nor the funk in its sound, nor the emotion in its movements. Suffice to say that it was filled with strong feminist imagery and cathartic movement, and was as welcome as a long, cool gin and tonic after a long, teetotalling drought.

Multi-disciplinarity and performance art isn’t unknown in Malta; the last few years have seen works by the likes of Roxman Gatt (Imħabba bl-addoċċ), Stephanie Sant (The Procession of Disappearance) and Charlie Cauchi (Latitude 36) straddle many disciplines and defy easy categorisation. And admittedly, performance art is nothing new beyond these small shores of ours. But there was something in the intensity of Verbi, that turned the sum of its parts into something beautiful and moving.

Let’s be clear; it wasn’t perfect. Artists can’t be good at everything, even if a performance is multi-disciplinary; photographers are not necessarily boxers, and visual artists are not always natural dancers. So, at times, the action was slightly unsure of itself, and some of the characters slipped ever so slightly. And sometimes the audience was confused, unsure of where they should go – our fault perhaps, for not reading the event description properly. But God it was refreshing! Like a great plate of hot, spicy noodles after a year of bland of bland ready-meals it hit the spot; well-seasoned and unpredictable, it offered something that we wanted but didn’t even know because it’s been so long since we tasted it.

At the end of twelve months that brought us self-satisfied theatre and meaningless public art, this story-that-was-not-a-story, with its shadow-boxing, swaying lights and cross-dressing was more quietly exciting than many projects that came before it. I was lucky enough to see it; if you missed it, hard luck and let’s hope we see something like it again soon.