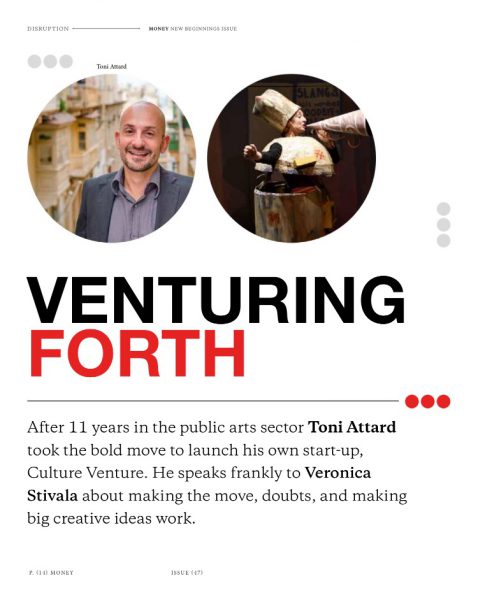 For years, Toni Attard devised policies, strategies and programmes that supported the growth of freelancers and small enterprises as the main contributors in the cultural and creative sectors. But after 11 years in the public arts sector, he wanted to practice what he preached.

“So,” he concluded, “the only way I could really experience the reality of a start-up in the cultural sector was to start one myself”. In addition to setting an example, Attard also believes the majority of people working in the sector will not apply for jobs but create their own.

At the time of our interview Attard is just three months into Culture Venture, “a new creative enterprise that makes big creative ideas work”, of which more later.

While admitting he is probably still in the honeymoon period, Attard explains that although he technically launched in January 2018, he had spent the previous three months developing his business plan, making his start-up known in international cultural networks and securing the first clients. “The support from family, friends and former colleagues was incredible, especially in moments when I started doubted my decision,” he muses. The biggest challenge was also keeping focus on the start-up process and turning down enticing full time job offers in Malta and abroad.

Ensuring he lay firm foundations, Attard reached out to Business First who supported his start-up with advice and seed funding to get him organised. Creating a start-up in this cultural sector is no different from other startups: “Identify a potential unique selling proposition, seek out collaborations and if the immediate market is too small, reach out to other markets from day one,” explicates Attard.

When I ask Attard about what it was like for him to go from being in employment to being his own boss, I am not surprised to hear that this committed worker still burns the midnight oil. (He replies to my questions at 9:30pm, while waiting for a call from a new client to discuss a new project). Yet  what has changed is the tempo and variety of work:

“My typical day is very atypical,” he confides, adding how he “may be reviewing a script in the morning, drafting a consultancy report from a café for lunch, lecturing in arts management in the afternoon and on a Skype meeting with clients in Australia at midnight. This requires a lot of discipline and prioritisation of work,” both with which he admits, he is struggling.

Nothing worth achieving is ever easy, and, knowing Attard personally, I suspect he is relishing the new challenge. Speaking of which, I am curious to learn more about how Culture Venture makes “big creative ideas work”.

The entrepreneur explains his three main areas of activity:

In addition to the above, one of Attard’s fortes is his rich database of contacts, and indeed this is one of the primary services he offers: bespoke advisory services through his extensive international network of experts. A part of this came about quite serendipitously: as he reached out to his European colleagues to inform them about his start-up idea, it transpired there were few cultural policy designers and consultants in the field operating within the private sector. “In addition to my own start-up I found myself in the middle of another start-up!” reveals Attard. Eight European firms are now in the process of joining forces and founding a European Cultural Policy Designers Network that will bring together fellow freelancers and small consultancy firms specialising in the cultural and creative sectors to develop new partnerships on a European and international level. These partnerships and Attard’s involvement with the World Summit and the International Federation of Arts Council and Cultural Agencies will also add value to the services Culture Venture offers to its current and future clients.

Turning to bettering the local cultural scene, I am keen to discover what advancements Attard believes Malta needs to make. While acknowledging a dramatic improvement in the professional status of culture and the arts, he stresses there are some important matters that need to be addressed: “cultural leadership of public cultural organisations by cultural professionals needs to be set as a standard and as a non-negotiable apolitical matter across public administration”.

Cultural infrastructure is also still weak, he adds and “this hinders our own potential to grow further but also limits our role to be part of on an international level. The MPO still has no concert hall, most actors still rehearse in living rooms and the last surviving purpose built theatre was built in 1731.”

Another point that deserves attention is thinking and acting international: access to international markets takes time and it’s very easy to get lost in unfamiliar territory.

And finally, there needs to be increased private support and investment: whereas the creative industries such as film, fashion, video games register substantial private investment, culture and the arts are still dependent on public investment, increasing the risk of a crisis in the sector should public investment be reduced.

Culture Venture is already working on some of these projects and will continue to champion the same principles and priority needs in upcoming policies and projects with the public and private sectors.

In addition to working in the cultural sector, one of Culture Venture’s exciting remits extends to working in non-artistic environments. This, admits Attard, is still the most difficult area to penetrate and he forecasts this development in his business to be introduced in the next three years. Explaining his plans he says, poignantly: “Creative development in non-artistic environments is not only about having a live band in your lobby or a team building exercise with artists but by introducing creative processes within the work environment that provides employees with time and space to come up with creative solutions. Inviting actors to support presentation techniques to senior management or engaging visual artists to provide creative solutions to management processes or providing a composer with a residency inside a company collaborating with other members of staff may sound alien to some businesses, however, these models have been proven to be successful with enterprises seeking innovation, creativity and new approaches in attracting and retaining talent.”

We close with a few words of advice for others who may be inspired to follow in Attard’s footsteps. Attard is realistically grounded and quips that “perhaps we should follow up in a year to see if I’m still in business”. The best part about Culture Venture is that every project is in partnership with different individuals and organisations so although so far on paper Attard operates by one, he is never on his own.